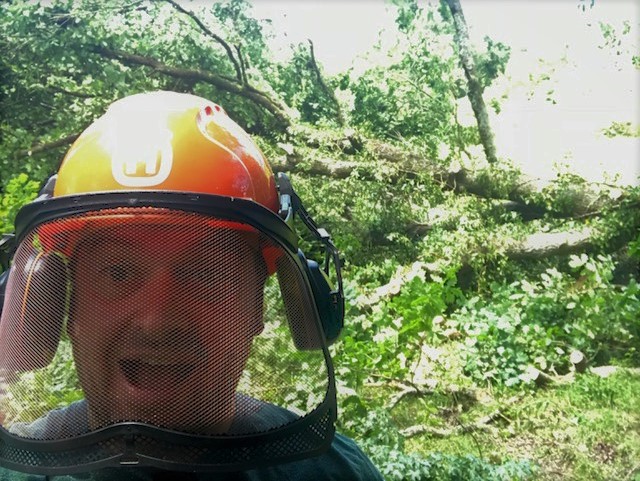 When I was at school, if I got 80% in a test or an exam, I’d be pretty pleased. Sure that’s probably not an “A” but its a solid B+. Something that no ones going to talk about, but equally you will get to eat your Yorkie bar on a Friday rather than it being confiscated for lack of effort. Surely the same should be said about cutting down trees? But I digress…

You will recall, of course, the now legendary post entitled “evidence of actual work”. The shock and confusion of that image of actual effort still resonates with me now. In case you forgot (though how could you), here it is again: 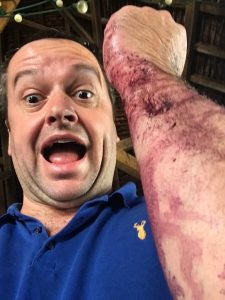 Look mum, I did some work.

Now, never let it be said that I’m lazy. Its been a mere 9 months, and I have a second, very different image to share, which again shows evidence of actual work: 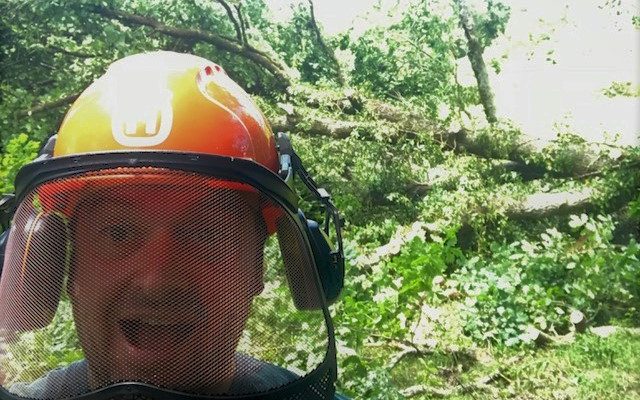 I think you will agree, a very fetching look

Yes, this week I have been cutting down trees in the vineyard. The first real step towards replanting it. 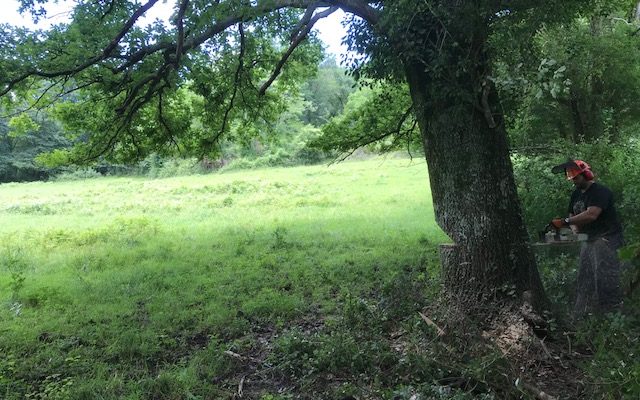 This old oak was very beautiful, but shading the vineyard behind just too much so had to go.

The principle behind tree felling is a simple one. You cut a notch out on the side you want the tree to fall, and then when you slice it from behind that notch, the centre of gravity makes it move in that direction. All the trees, big though they were had fallen exactly as planned.

Approaching the fifth, and it was getting close to lunch time, the sacred hour, so we might have rushed it a bit. We cut the notch, sliced from behind, heard a crack, and took the chainsaw out quick, expecting it to do exactly as the others had done. Ummm. The slice from the back quickly closed up as the tree moved in exactly the opposite way that was planned.

Panic – this could interfere with lunch

So basically we both ran for our lives and waited for a gust of wind to do its worst. This took about 10 seconds, and the tree fell backwards onto the access track in front of the vineyard. Luckily it missed our car by a few feet and the worst that happened was that we surprised some cows and delayed our lunch while we cut it up.

So I make that 4 trees out of 5 successfully cut down, a mark of 80% and a grade of B plus. If anyone has some trees that need felling, just let me know – I have a pretty good success rate. Now can I have my Yorkie please?

Next time will be news of some pretty serious progress in the winery! Until then, stay safe…